(1) 2 3 »
Reply Register
Anonymous
New Convict and Rant #1
For those of you who have followed my forray into Cichlids, I ended up putting my original Convict down. When I got another it became obvious that the older one just wasn't acting right, I compared them for a couple of weeks before making the descision.

Anyway, I've been thinking of getting a mate to perk up my new female. I checked a few shops locally and no-one had a male Convict in, then went to a certain national chain that isn't P@H.

They had a good looking male, but he was in a tank with a breeding pair of Jags, a breeding pair of some African cichlids and several other African and American cichlids with no hiding spaces or weed.
The two breeding pairs were terrorising everything, so I asked how much the Convict was and agreed to buy him, his fins were in tatters and I couldn't bear to leave him.
It was then that the shop guy pointed out the 1ft tank containing over 50 baby convicts (just at the age where they start to fight) saying "they're his", meaning that the convict had also been separated from it's mate.

I'm thinking of putting in a complaint about the shop, on the basis that the fish don't have a habitat similar to their natural one.

On a related note, so far the two of them are getting on okay, but I'm keeping a close eye on them in case they need separating.
Report
dwss59

Re: New Convict and Rant #2
Unfortunately the vast majority of shops will not have natural set ups for the fish that they're selling, due to turn over of stock, expense and additional time spent cleaning. This is not to say that the fish aren't well looked after.
Often you'll find in shops set ups like you've descibed. These are usually in the sumps as the smaller tanks on the systems are not big enough to house these fish. So straight away its a better bet but in the example of the convict you've purchased he could have been moved to a smaller tank on the system. Unlikely that a shop would do this as it will reduce their stock capacity with the con taking up one whole tank.

Unfortunately the reason for there always being bigger cichlids and catfish in the sumps of shops is largely down to people buying these fish growing them on and reaching a stage where they say 'Oh its too big or too aggressive,' And return them to the shops. At least they're taken in rather than left to suffer.

Excuse me there, but good luck with your cons,
If they're co existing peacefully at the moment then you'll have a good chance of babies in the future.
Central Americans; once they pop they don't stop!
Report
Anonymous
Re: New Convict and Rant #3
I'd understand that, but most of the shops sumps were empty - these guys were in a normal tank, with no gravel even! I've no sympathy for shops that overstock fish, then mix them up using the excuse of "No-where else to put them".
EDIT: I forgot to say, none of the tanks had weed or hiding places and not many had gravel.

Anyway, my pair are getting along brilliantly, I couldn't have hoped for better. No scuffles at all, they started courting as soon as they were put together even though he is about 4 times her size!
They spent all yesterday and last night shifting gravel, and watching them now from a distance I think they may be laying eggs - at least they keep flipping over inside their prepared lair

Re: New Convict and Rant #4
Fair play mate, no excuses then!

Shifting gravel!!!
Excellent news, don't worry about the size difference, babies should follow promptly.
Be very watchful after the fry have grown on a little as the male may decide he's ready for more before she is. If this happens he may become aggressive towards her.
Keep us updated!!
Central Americans; once they pop they don't stop!
Report
Anonymous
Re: New Convict and Rant #5
Got up this morning to discover the pair guarding eggs!

I'm not sure what to do with this first brood - in the future I will probably be destroying the eggs, but I'm thinking of letting this batch hatch to check if the parents are fertile and can raise healthy babies.
Report
gwa84

Re: New Convict and Rant #6
i just fed the parents there normal food they will crumble it up for the fry they will also grase on tiny macro foods in the tank already
[img]http://i275.p
Report
dwss59

Re: New Convict and Rant #7
Likewise I usually let the babies fend for themselves food wise.
If you want to grow them on better then move them to a smaller tank where you you can feed them. I've found that in larger tanks it's tricky feeding but it can be done if you persevere.

I'd be careful about destroying the eggs in the future as it will give the female no time to recover post spawning before the male is on her again. Spawning disputes can kill, so be careful.
Alternatively if you don't want them to spawn then split them up.
Good luck with the babies.
Central Americans; once they pop they don't stop!
Report
Anonymous
Re: New Convict and Rant #8
Here's Mum, trying to fan fresh water over the eggs and watch what I'm doing at the same time 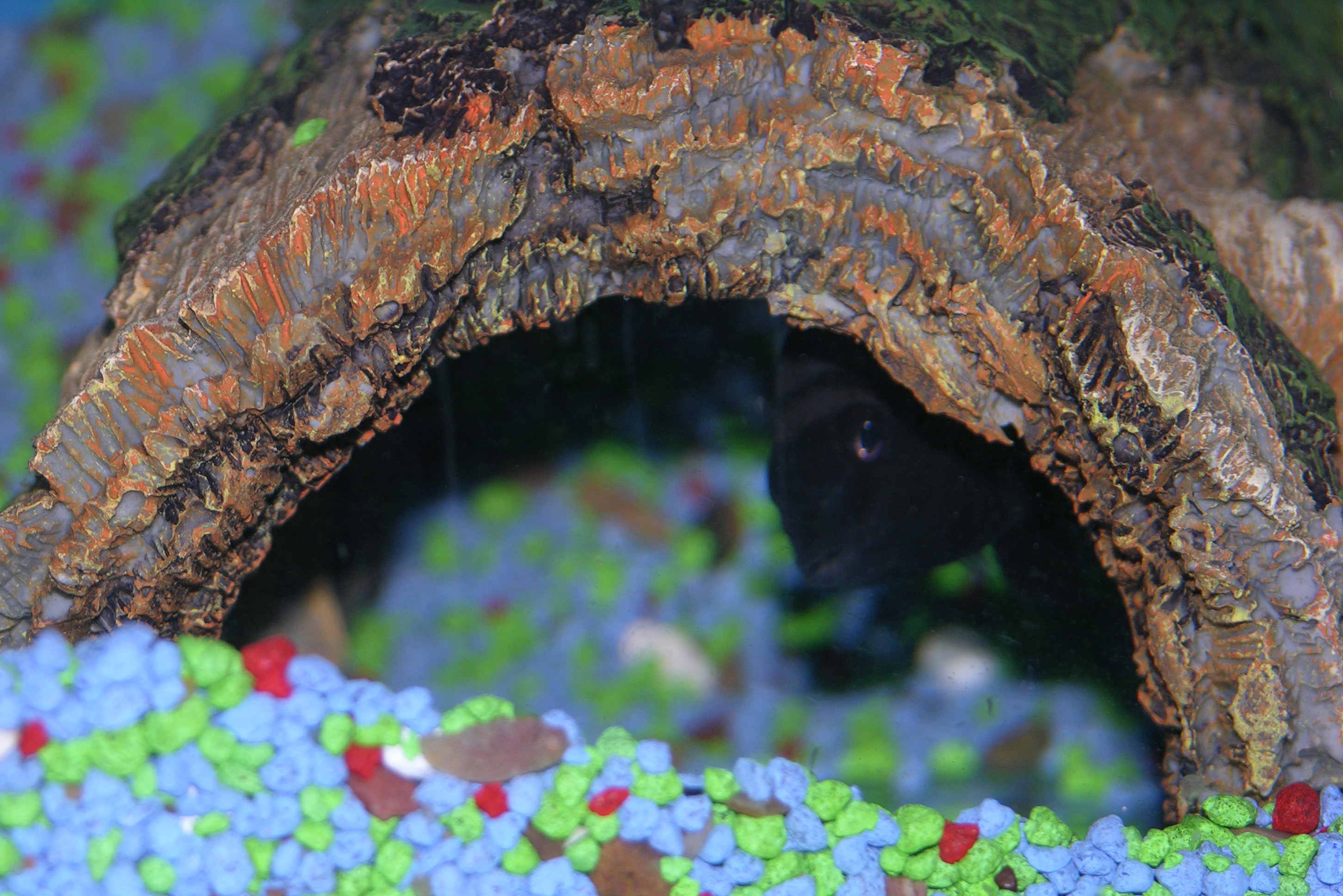 Central Americans; once they pop they don't stop!
Report
Anonymous
Re: New Convict and Rant #10
I'm not sure what's going on at the moment. I saw a tail wiggling out of one of the eggs on Saturday, but since then haven't seen any sign of babies.
A couple of the eggs went white, but most stayed brown and have now hatched by the looks of them. Mum is still guarding the lair but has been out a few times to "dance" with the male, who has also been spending a lot of time patrolling around the lair.

I should say, both are very nervous fish because of their time in the fish stores. I've been trying to get them used to me, but with little success. I've heard that if they're nervous they can eat the newly hatched young, is it possible that this is what has happened? I think I saw the female pecking at the eggs, but wasn't sure if she was helping them out, eating them or cleaning up the remains of the hatched eggs

Any advice would be great